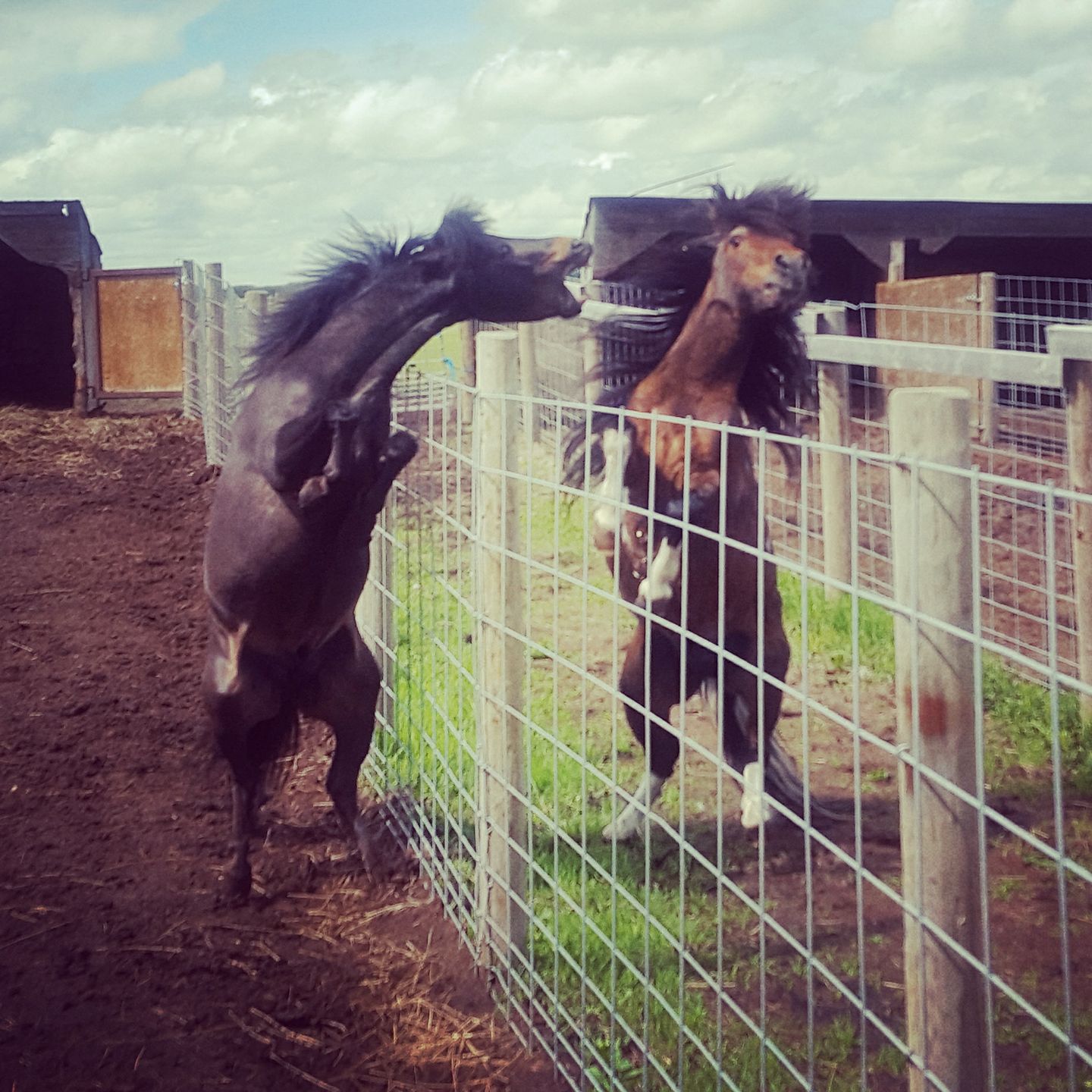 “My new Miniature Horse turns and kicks when I go into her pen.”

“Our new weanling was sweet at first, now when my daughter tries to brush her she pins her ears and bites.

“My colt climbs on me when I try to lead him, and reaches over and bites my knee.”

It’s not uncommon to see these questions and scenarios asked in advice groups on Facebook. Different forms of what is regularly termed “aggression” pop up, and people go looking for solutions. Unfortunately, online advice is usually heavily weighted towards punishment, but punishment is not necessary and can be very detrimental to your Miniature Horse and the relationship you want to build with them.

First, Is It Aggression?

Often, play behaviour is classified as aggression by humans, as it feels aggressive to us! Horses, especially young male horses, play rough, and the colt who rears up on you or reaches over and bites you leg likely intends nothing more than “play with me!” Of course, that doesn’t mean we want to encourage that behaviour to continue, but knowing that it’s not intended as harmful can help us figure out a response.

And that response shouldn’t be punishment. In fact, in these situations, what we think of as punishment – shouting, shoving, or hitting – could easily be interpreted by the horse as you joining in the rough and tumble game he’s tried to initiate.

Instead, find a way to redirect that playful energy.

And remember that the more skills they learn, the more behaviours you teach them that ARE acceptable around humans, the less likely they are to offer “horse play” around you.

Another common behaviour that is misinterpreted as aggression, particularly in babies and very young horses, is mutual grooming. When we scratch a foal – which is, incidentally, a great way to make friends with them! – their instinct tells them to scratch us back, and when horses scratch each other they SCRATCH. I mean, they use teeth, but horse skin is covered in hair and much sturdier than human skin, so we don’t want to just “let” our baby use their teeth either. But they aren’t being aggressive by chewing on you, they’re actually trying to be polite good horse citizens, and if we smack them for it they’re going to be very confused and fearful of us as a result.

Instead, simply stop scratching for a moment when they start scratching you back, until they remove their nose, and then go back to scratching. They figure out very quickly that nose not on you means lots more of the scratching that they’re so enjoying. Nose on you = no more scratching. If you’re consistent they will catch on very fast and, if they slip up and start using teeth again, it’s easy to remind them.

There are, of course, situations where Miniature Horses ARE being aggressive to their owners. Horses who kick at you, or pin their ears and bite. But regardless of the form of aggression there are a few things to remember.

There are only two reasons that a horse is ever aggressive to a human.

And neither of those reasons are going to be solved by answering their aggression with more aggression.

If they’re reacting aggressively out of pain and are punished, then they’re going to be fearful and be even more aggressive.

If they’re reacting aggressively out of fear and are punished, then they’re going to be even MORE fearful and potentially MORE aggressive.

There is always another way, we just have to keep ourselves safe, don’t allow our own fear response to control how we react, and think the situation through with logic instead of emotion.

Either way, when aggression happens, the first thing to do is remove ourselves and keep ourselves safe. Miniature Horses are still horses, and we CAN get hurt. Our safety has to be the first priority. And don’t worry about “letting them win” – either they’ve already learned that aggression makes the human go away, or you’re just telling them, “I hear you and I’m giving you space.” Regardless, “winning” is not important. Your safety is.

Then you need to deconstruct what happened. What were you doing when the horse reacted badly towards you? Were there any signs leading up to the incident that you missed at the time, but looking back might’ve been warning signs?

If the aggression only happens when you touch a certain spot, or ask the horse for a certain movement, then you need to think about pain. Talk you your vet, schedule a physical or lameness exam, but even if the vet doesn’t find something obvious, don’t dismiss a pain response. If they tell you it hurts, believe them, and make allowances. Maybe use a softer brush on that area, or make a wider turn that direction, or ask the horse to back up only one step at a time. Whatever changes you can make so they don’t feel they need to defend themselves will not only build a much stronger relationship, with a horse who knows that you listen to their concerns and take them seriously, but might even help them heal from whatever is causing them discomfort too.

It’s a similar approach to straight up aggressive behaviour. First, remember it’s based in fear. Think about what could be scaring them. Often, I see someone say, “Our new yearling was so sweet with our small child, but now they pin their ears and kick at her!” Probably the small child – through no fault of their own, just being a small child – did something that scared the yearling. It could be as simple a sudden movement that startled them, but something has convinced the horse that the kid is scary and they need to make them stay away.

Another common issue is a horse that wheels and kicks at the human trying to bring feed into their pen. This one is often in horses who have at some point felt like they weren’t going to get enough food, whether they came from a situation of neglect, or simply lived in a herd where they were sometimes pushed off the feed, and now they think they need to fight for the food they need.

Regardless, while we may never know exactly why our horse is being aggressive, our goal needs to be to give the horse the confidence that they no longer need to defend themselves, and teach them an alternative behaviour we’d prefer that they find more reinforcing.

That might mean changing our management system – we could feed the horse in a slow feed net so feeding is less of a high intensity time and maybe they won’t be so anxious.

That might mean teaching a non-compatible behaviour – if they earn a treat for touching a target, they’re going to choose to touch the target and earn a treat rather than kick.

That might mean working with them in protective contact (through a fence) for a while, to keep you safe and give them confidence.

What You Resist, Persists

We tend to focus on the things we don’t like about our horse’s behaviour and focus on it exclusively. But the thing is, if we’re focused on it, and expecting it to happen, that’s probably what will happen. And the more we wait for a behaviour to happen and then react to it, the more of a routine or habit it becomes.

Instead, focus on the behaviour you’d like to see, and figure out how to create that result, through changing their environment, adapting your interaction with them, and making the new behaviour more reinforcing than the old one.

Think Outside the Box

Every horse is an individual and every situation is different, so there is no “one size fits all” solution, but if we listen to our horse, help them gain confidence and teach them more productive behaviours, we can build a positive relationship.

This can be a difficult shift to make, especially for those of us who’ve been involved with horses for any amount of time. The “show him who’s boss” “teach him respect” “don’t let him get away with that” school of thought is endemic, and if you’ve been involved with horses for any amount of time, I can bet that you’ve used punishment on a fearful horse before. I know I have. And that makes it harder to change, to make the decision that what you did before wasn’t the best choice. It’s uncomfortable, and our brain will try to make it comfortable for us by disregarding new information that contradicts the choices we made in the past. It’s called “cognitive dissonance” and can keep us stuck in old ways of doing things if we aren’t aware of it.

But all we can ever do is the best we can with what we know at the time. When we know better, can do better.

Be creative, listen to your horse, and think outside the punishment box. You’ll build a much stronger, more rewarding relationship with your horse!

2 thoughts on “Dealing With Aggression in Miniature Horses”