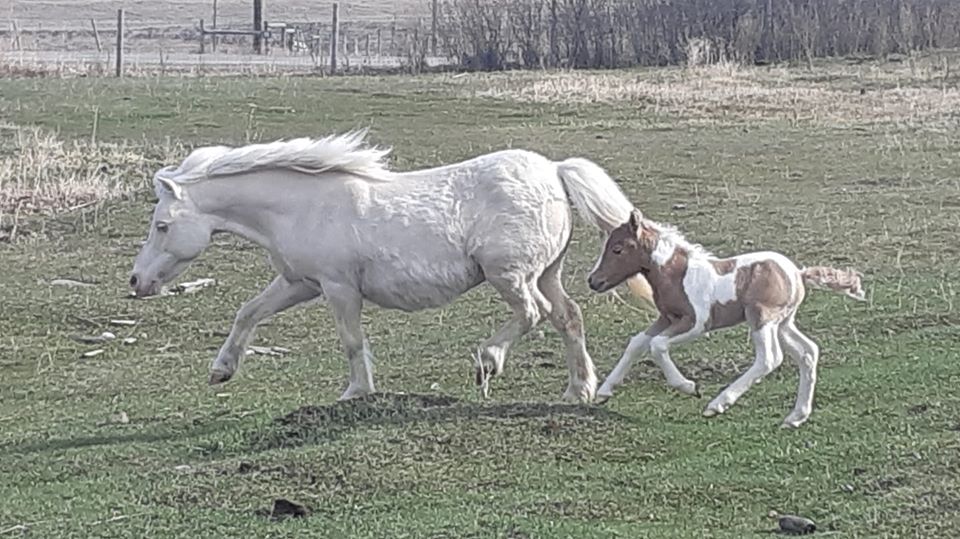 A year ago we brought home our unicorn, Bailey. 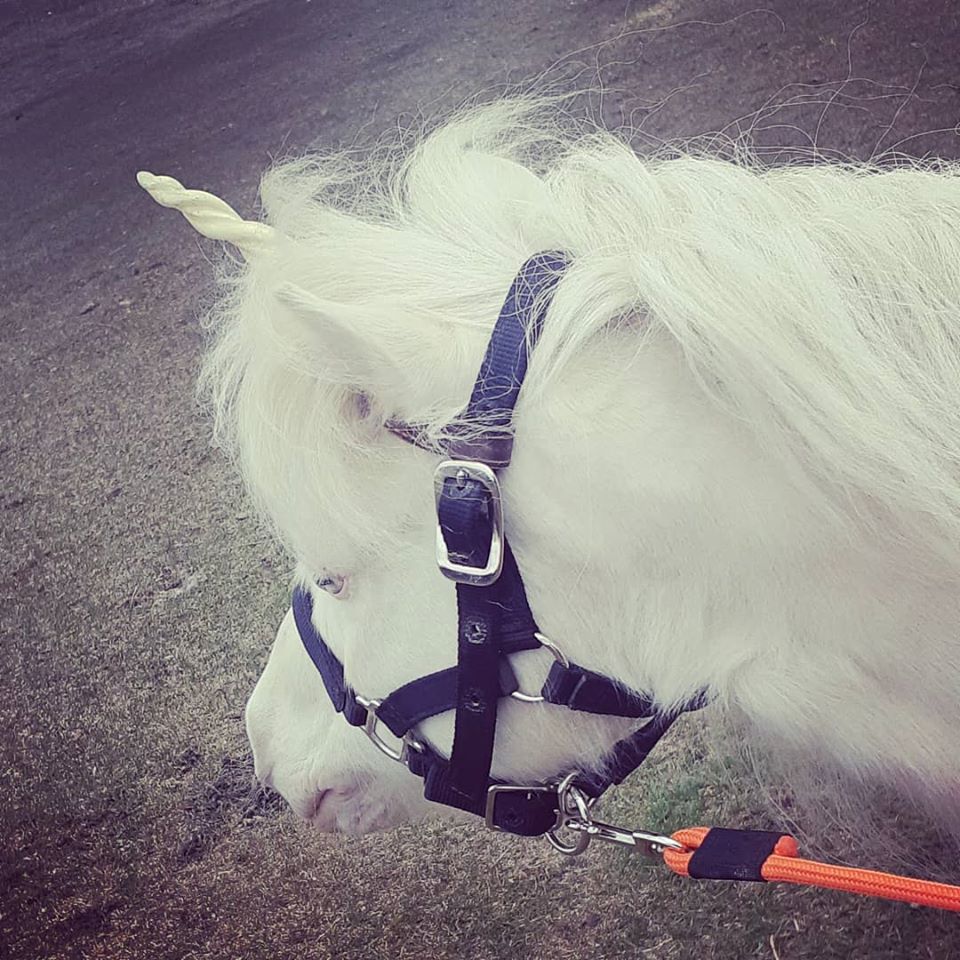 When Bailey was a yearling she was in a fancy registered horse sale I went to with my grandad. While I’ve never been a big fan of double dilutes (all that pink skin and blue eyes – and all the scrubbing it would take to get them clean!) I fell in love with her. I made Grandad come look at her, pointed out her bloodlines, and generally did my very best to use all my powers of persuasion as the oldest grandchild to convince him that we needed her. I did convince him to bid on her, but I wasn’t the only one that was impressed by her, and she went for quite a bit more than it made sense for us to spend when we had plenty of pretty mares at home.

The next year, I was super excited to see her out and about with her new owner, who loved her very much. She called her Sugar, and she was new to horses but learning lots and having fun with her. Sadly her owner passed away and I lost track of the pretty white filly.

When I heard of her again, the breeder who ended up with her told me they could touch their fingers behind her ribs she was so thin when they got her. Their vet wasn’t sure she would survive, but with excellent care, she did, and went on to thrive. Way back then, about 7 years ago, I asked that if they ever sold her, to please let me know. I always liked her, and I wanted to be sure she had a safety net, and nothing that awful would ever happen to her again.

Last year, I got a phone call asking if I still was interested. We sure didn’t need another mare, but how could we pass it up after all that history! And she was still a young, proven broodmare with great bloodlines, and a perfect little unicorn! Off we went to bring her home – forever!

She’d been called Bugsy, for most of her life now, but it just didn’t seem right to us to call such a pretty girl such an unfeminine name. Since her registered name is Enchanted Acres Irish Cream, we settled on Bailey, and she seemed to like it right away, whinnying back when I called her. Very much a people horse, Bailey would rather spend time with humans than horses, and is very clever. Within 48 hours she’d learned to “smile” for a treat, and her big cheesy grin makes me laugh every day.

We didn’t really plan to breed her when we brought her home – that wasn’t the point of adding her to the herd. But when we talked about breeding for a foal or two last summer, we really wanted to try to get a foal from our young stallion, Frankie. He’d never bred a mare, so we wanted one that was very experienced – but our two “go to” mares wouldn’t work. Barbie was retired from breeding after raising her last foal, our baby Wish, due to a knee injury that didn’t need the additional stress of pregnancy. And Ruble is Frankie’s mother! After that, the only two mares we had who had foals before were Dazzle, our buckskin mare, and Bailey. While I wasn’t super excited about crossing silver bay Frankie on either of those mares with their cream genes, afraid that too many dilute genes might result in a washed out non-colour foal, I decided that colour wasn’t a primary consideration, and since we would be excited to see both a Frankie foal AND a Bailey foal for the first time (for us), that was the cross we chose.

Frankie really didn’t know what he was doing. He thought that the way to flirt with girls was to scream at them and then turn around and kick. It quickly became clear I wasn’t going to be able to manage this operation on my own, so I got mom to help me and we did, with some difficulty due to Frankie’s being vertically challenged, get a good cover. 48 hours later when we tried again, Bailey was going out, so we had to hope that the one cover was successful, but I kinda figured we’d have to try again next cycle.

But … when I would’ve been teasing her to see if she was coming back in, Frankie was at the vet hospital with a septic joint, and while I didn’t tease her since we couldn’t rebreed anyway, I kinda had a suspicion she’d come in. Hence, I really didn’t think we had a baby coming this spring at all!

A couple months ago I started to get suspicious – it wasn’t that Bailey had a huge belly or anything, but her shape seemed suspicious, full through the flank and already kinda pointy in her bum.

Then when she was waiting for her turn with the farrier the baby made itself known in no uncertain terms, bouncing around like crazy!

I brought Bailey into the barn early, about 280 days, as she doesn’t really get along well with the other horses, and I thought it would be nice for her to move into private accommodations (stall at night and her own turnout pen during the day) now that she was very pregnant.

By 295 days I had the camera set up and was checking her regularly. She came along so quickly, bagged up and looking close enough that she could surprise us. By 305 she was looking READY in every way, and I was watching her around the clock. She was so uncomfortable, and not afraid to show it.

For 10 days she would regularly act like she was in labour. A few times a day she would start stomping around the stall, kicking at her belly, pawing, biting at her sides, lying down and getting up, puffing and even laying flat out and looking like she was pushing … then she’d get up and go eat hay like nothing ever happened. For 10 days I hardly slept as surely one of these times she would ACTUALLY have the baby!

The afternoon before she foaled, she cut her nose – she was so itchy and rubbed the protective cap off her water pail handle, I think that must be what she caught herself on. It wasn’t a big cut, but was full thickness through the skin and had quite a flap – it looked like it needed stitches or the flap trimmed to me, but since I didn’t really want her sedated for stitches while she was due to foal any second, and I had the vet scheduled to come the next morning anyway, we did some doctoring at home in the meantime. We clipped the area, scrubbed it with betadine and stuck the flap back down with some bandage material – we figured the flap would need to be trimmed by the vet in the morning but it would protect it overnight. Then we put her mask on – with Bailey’s pale blue eyes and pink skin she has a special sunvisor mask that she wears outside as much as possible, so she’s very comfortable with it. And it worked like a charm, by the time the vet saw it the flap had stuck down and we’re optimistic it’s going to heal well!

At 6 in the morning, Bailey was up to her old tricks. Pacing, pawing, lying down and getting up … but given all the times she’d done it before we didn’t take it too seriously. Until she stood up and there was feet!

Mom and I raced to the barn to be there for the birth in person, in case she needed help – and as soon as Bailey saw us she jumped up and came over, smiling for a cookie. Um, Bailey, weren’t you in the middle of something? We had to back away and then she got back to work.

We were concerned that the baby would come out all white – not that it really would’ve mattered, but one white horse is enough. 😉 And those legs that showed first were white. Mom said, “oh those are white legs!” but by then I could see the head and I replied, “the head is really dark though!” And it was! Through the sac it looked SO dark, and I could see the cute little blaze too.

We told Bailey she just needed to finish having the baby and then she’d get lots of cookies so she laid down and squirted that kid out in record time. 😉 She was ready to leap up, so once I pulled the sac off the baby’s head I moved it up so she could reach baby’s nose and then she stayed down for a bit meeting her new baby. The baby was so strong! Already trying to figure out those front legs and get up before the hind feet were even born!

Bailey stood up, passed the placenta, and I called Grandma to tell her the baby had arrived. She asked what it was, a filly or a colt, I said hang on, I haven’t checked … it was a girl! I told her I didn’t know what colour it was, but it was a bright pinto.

She looked so dark – it wasn’t until she dried that we figured, almost by process of elimination, that she was palomino. I’m hoping that because she’s such a dark baby colour that her adult shade will be golden palomino! Not that it matters what colour she is, of course! 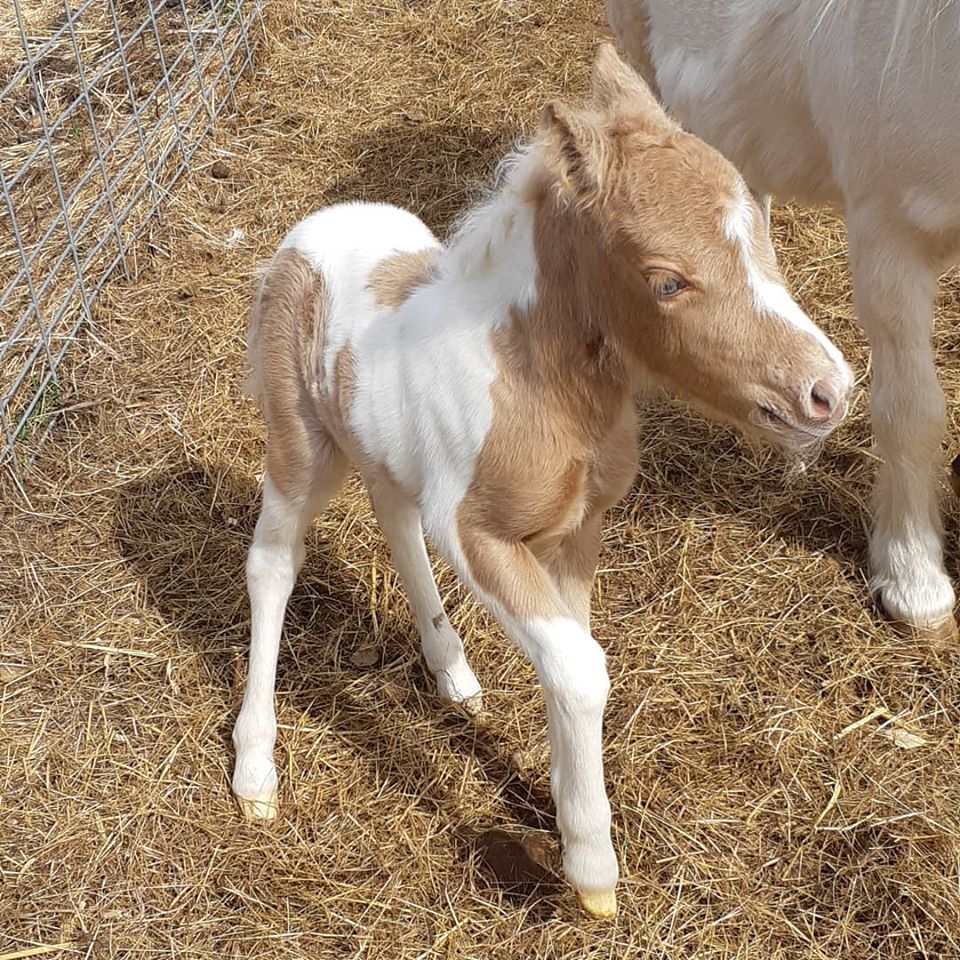 Baby was on her feet in no time flat. She was so busy trying out her new legs and exploring the stall (sucking on the fence much to our chagrin!) that she couldn’t really be bothered with nursing, and Bailey wasn’t too focused on the job either – stressing me out! I milked Bailey a bit and got some colostrum into the kiddo, but then I also called and updated my appointment so that the vet knew we might need to tube her to make sure she got all the colostrum she needed.

Luckily, they both focused on the nursing thing eventually, and before the vets arrived she’d had a couple good big nurses. It was about 3 hours – WAY longer than I like! – so the next morning I pulled blood and took it down to the clinic for them to run a SNAP test and check her IgG levels. She passed with flying colours, she got all the antibodies she needed, and once again, I worried a lot more than I needed to. 😉

I’d read, about the time that I started to suspect that Bailey was going to have a baby after all, that a baby unicorn was called a sparkle. So our sweet baby girl is named Sparkle, and her registered name will be You Bet I Sparkle, since this is our Y naming year. She has her mother’s golden colour, her daddy’s pinto and blue eye. She is a chatterbox like daddy, and a gregarious personality like her momma.

We brought our unicorn Bailey home a year ago, on May 4th. This year, on May 5th (my Grandad’s birthday too!) she had a baby Sparkle!

3 thoughts on “New Addition: You Bet I Sparkle!”