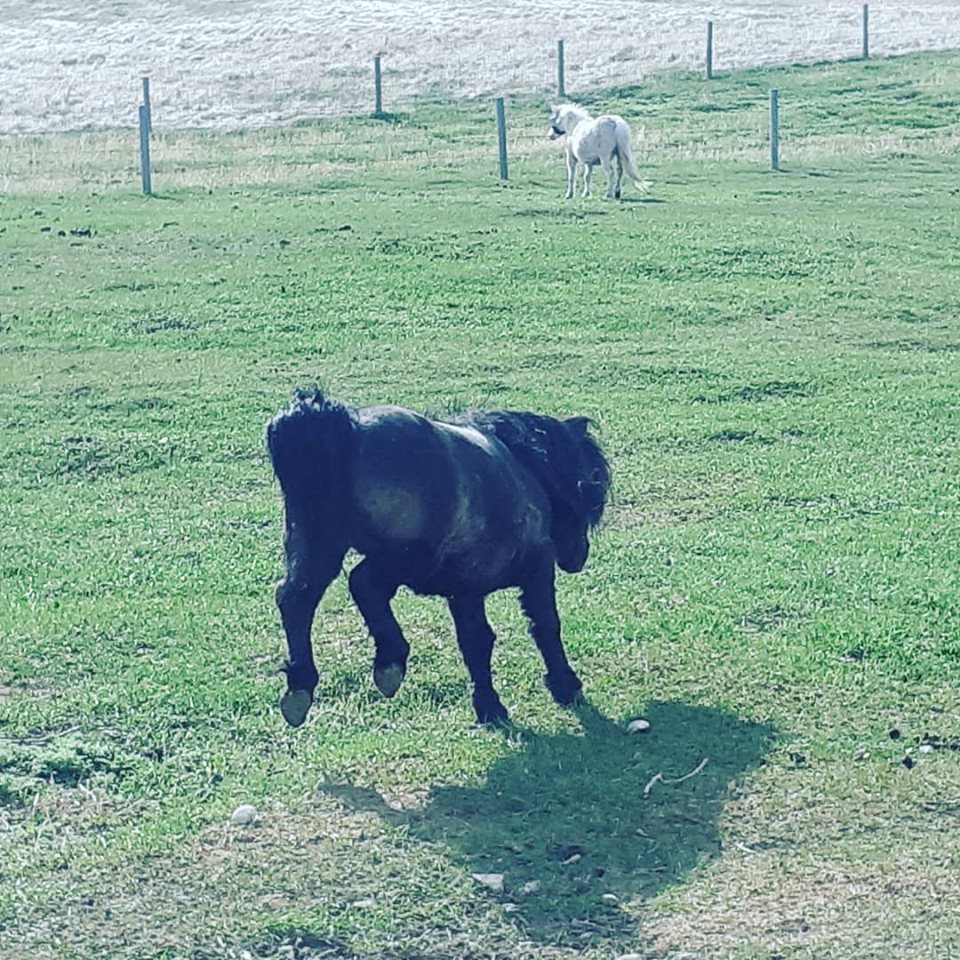 Horses evolved to live in the wild.

They traveled many miles every day, in search of large amounts of low quality forage that they would graze on 18 hours a day. The lived in herds, and relied on their herdmates for safety and connection.

Today, that’s not how our domestic horses are kept, for a lot of very good reasons and some not so good ones. And mostly, horses do pretty well.

But I think we underestimate the affect a horse’s living situation can have on their mental well-being, and from our point of view, that means their ability to do the things we need or want them to do.

This was brought into sharp focus for me recently.

We have a horse we call Oly, who injured himself a year ago in January. Not sure how – a slip on the ice, maybe, or a kick from one of his pasturemates? – but he was very stiff and sore one morning. He was eating, drinking and getting around okay though, so I monitored him, and he gradually improved. A couple months later he got much worse again, and I moved him to a small pen, and had my vet look at him. At that point it seemed most likely it was a soft tissue injury and we left him in a small pen to let him heal. When that didn’t seem to help, he was moved to a stall to further restrict his movement. But there was no significant improvement by fall, so we had the vet out again and x-rayed his shoulder – they found significant arthritic changes, which meant he wasn’t going to recover and become sound again. Since there was a slim possibility that there may have been some nerve involvement, I made the decision to keep him in the stall until spring, to give him every chance to heal as much as possible, and to keep his arthritic shoulder a little warmer and protected. Then in late winter he developed a nasty skin condition, necessitating clipping for proper treatment, and meaning he was going to have to stay inside until the weather got warmer.

All told, Oly was in a small pen or stall rest for around 18 months (by design, as that’s how long they recommend for shoulder nerve damage).

He didn’t like his stall, no matter how I tried to spoil him – he always had forage, he was never the only horse in the barn, and I made sure he got one of his favourite cookies each and every day. He was a challenge to do anything with, blanketing became dangerous for me, so that I had to switch to another blanket that he approved of slightly more. Some days I would have to wait and coax to get him to even take a treat from my hand. He was hard to halter, and spooked at everything. And if anyone new was in the barn, he was quite expressive about his displeasure, pinning his ears and tossing his head to tell them to get away from him.

Last week I started turning him out during the day – he’d gotten all the benefit he was likely to get from the stall rest, the weather had improved enough that his short coat would no longer bother him, and it was time to start gradually getting him used to being outside. He’s still very lame to watch him, but it doesn’t seem to bother him, and doesn’t get any worse with all the bucking and racing around he does.

The big difference is in his personality! After only a couple days of turnout, I was able to stand at the stall gate with his halter and he would come to me and stand quietly while I put it on. Previously, it was always a struggle to halter him, with him turning with his head in the back corner, and me having to take lots of time to get to his head or he’d swing his hindquarters into me. He’s also WAY less spooky, no longer jumping and cowering at every noise or movement.

His stall confinement might’ve been medically necessary, but it certainly wasn’t good for his mental state. And imagine if I’d been trying to teach him something new in the midst of his stall rest! Oh, would that ever have not gone well!

It made me think about horses that people are having behavioural or training issues with, and whether or not they’ve taken into consideration their lifestyle and management systems. How many “problem” horses would magically not be a problem anymore if they simply lived outside in a herd instead of spending so much time confined or by themselves?

As far as Oly goes, he’s turning back into the sweet, if timid, boy we knew before his stall rest.

Horses need forage, friends and freedom to be at their best. Are there changes you can make to maximize your horse’s lifestyle?