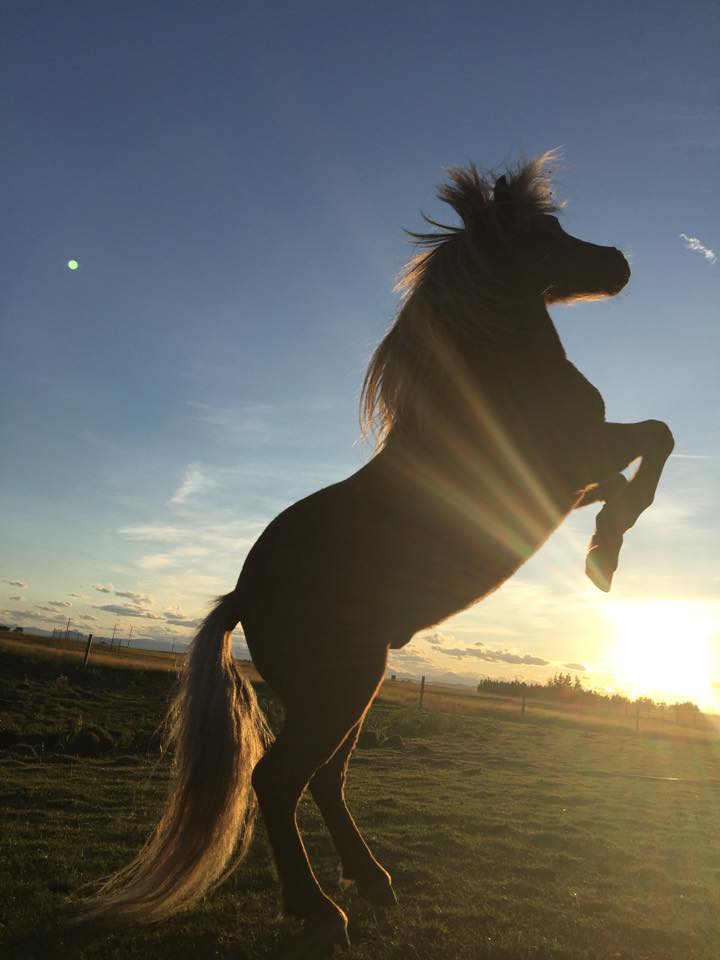 We had a foal born we named Hawk. He was definitely different – not curious about human contact at all, which meant everything was more difficult with him. Despite infinitely more time spent with him, by the time he was two years old he was far behind his brothers, nearly impossible to lead, brush or handle his feet.

With a lot of time and perseverance (and no small amount of blood, sweat and tears), Hawk gradually became accustomed to handling and learned to become a competent driving horse.

I still never had the feeling, however, that he enjoyed anything we did together. He wasn’t unwilling, but he was definitely not engaged, and since my previous driving horse LOVED to drive, I really wanted that partnership again.

I taught Hawk his first trick, rearing, sort of on a whim. He was a natural athlete, and would stand on his hind legs and bang the gate with his front feet to tell us it was time to put him outside (it was always time, in Hawk’s opinion), so he already had the musculature to perform the trick, and it was quite easy to implement a cue and reward to reinforce the behaviour when asked for (and not when it wasn’t.) 😉

Right away I noticed he was more engaged, and taught him to shake his head and nod on command, which he learned in about 5 minutes. I really enjoyed asking him, “Are you cute?” and having him shake his head no, only to nod yes to the next question, “Are you handsome?” He got so cued to the word “cute” that he would shake his head when people walked up to him and said, “Oh, aren’t you cute!”, which more than once resulted in a retort of, “Yes you are!” from the well meaning stranger.

After that it was bowing, Spanish walk, waving and painting, but while we had lots of fun, the tricks themselves aren’t the important part of the story.

For the first time in his life, Hawk began to demonstrate a personality. Horsinality?

He was engaged in what we were doing, and not just in the tricks, but in everything we did.

He had more confidence. Rather than simply doing what I asked, he was comfortable enough to put his own spin on things, to lean towards a cones course, to be bouncing around at the start of the marathon, to take matters into his own hands and decide to jump a cone when we had a difference of opinion on which direction to drive around it.

Those may sound naughty, but they’re not. I don’t want an automaton, I want a partner; one with a sparkle in his eye, who is as invested in what we’re doing as I am, and who isn’t afraid to tell me what he thinks. The old Hawk wouldn’t have noticed the cones course. He wouldn’t care where we were driving, and probably would run right over the cone.

Trick training showed Hawk how to have fun, and it turned us into a team, working together at everything we did.

I’ve taught tricks to a number of other horses since then. There’s Finnegan, who taught himself to nod because he figured out how Hawk got treats. Frankie and Johnnie, who learned to target, which has been a huge benefit in getting those two precocious youngsters through all kinds of real life challenges, like halter breaking, and trailer loading, and clipping. Frankie nickers on command – which is adorable – and Johnnie spins in a circle and does obstacles by remote control. Rocky gives kisses and loves to stand on a pedestal.

One of the reasons that trick training can make such a difference in the engagement and partnership, is that tricks are usually taught using some degree of positive reinforcement. In learning theory, positive reinforcement is the adding of a reward to reinforce the desired behaviour. Most horse training is traditionally negative reinforcement – that is, something is removed to reinforce the behaviour instead of added. This is the classic pressure and release method of training; a stimulus is applied and the correct response is marked by the release of the pressure.

Science shows that a skill learned through positive reinforcement is not only more firmly remembered, but the positive emotions associated with the reward as forever associated with the skill learned, so that it the behaviour itself becomes reinforcing. Through teaching tricks, we can make use of the science behind positive reinforcement – even if we don’t know anything about it, like I didn’t when I taught Hawk the tricks that would change our relationship.

Winter is a great time to teach tricks, as you don’t need good footing or warm weather or an indoor space. I taught Frankie to nicker while I fed him his breakfast each day, adding only 30 seconds of time – and WAY more enjoyment – to my morning chores.

My challenge to you this January, is to teach your horse a trick!

6 thoughts on “Why You Should Teach Your Miniature Horse Tricks”