I’ve been incorporating positive reinforcement into my training more and more all the time, and I have been sharing with my students how hugely effective it is, and beneficial to your relationship with your horse.

But if you’re not – yet – ready to take the plunge and jump into reward based training, simply having a good understanding of Learning Theory, and knowing how your current methods of training fit into the theory, will make your training more precise and clear for your horse.

Learning theory is a scientific principle of how learning takes place. Learning is a result of either reinforcing the desired behaviour or punishing an undesired behaviour.

Positive Reinforcement, then, means you’re adding something the horse finds valuable as a reward for getting the response you were looking for. Negative reinforcement includes traditional pressure and release techniques, with an aversive stimulus being removed as a result of the correct behaviour being demonstrated.

Positive punishment involves the addition of an aversive, following an undesired behaviour, and negative punishment (which isn’t really effective in horses) would be removing something good, until the unwanted behaviour stops.

All training approaches and techniques can be explained using learning theory. 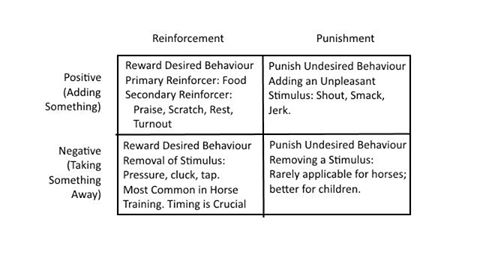 In my teaching, I’ve found that people often struggle to understand the difference between negative reinforcement and positive punishment, and since they are closely linked – both making use of an aversive – it’s quite understandable.

But if we had a better understanding of the difference, hopefully when we choose to use aversives in our training we could use them more effectively.

An aversive stimulus means something your horse doesn’t like and is motivated to find a way to make it stop. It can be very minimally aversive, or a strong, scary, even painful aversive. Whenever we’re using aversives in our training, we want to be sure they are minimal – think body position, voice, and gentle tactile cues, rather than jerks, smacks or harsh equipment.

The big difference between negative reinforcement and positive punishment is the timing of when the aversive is applied. If you are teaching your horse using negative reinforcement, you apply an aversive, and remove it as soon as you get the response you want – it’s the timing of the removal that reinforces the horse and helps him learn what you’re asking him to do. In positive punishment on the other hand, the aversive is applied after a behaviour you didn’t like, to discourage it from happening again.

We want our training to be LIMA: Least Invasive, Minimally Aversive.

If we are going to use aversives, we need to both find the smallest aversive we can that will help our horse understand, and we need to commit to not escalating it.

If you apply a stimulus, and your horse doesn’t give you a response, that means he doesn’t understand. Adding a stronger aversive isn’t going to make it clearer to him, it’s just going to mean that you are switching from negative reinforcement to positive punishment, only you are punishing him for simply not understanding what you’re asking him to do. If we don’t get a response during our training attempts, instead of increasing the intensity of the cue, we need to stop and think about how to explain it to our horse another way, until we find one he understands.

The other concern is that when we’re using an aversive, the timing of the release is critical, not only to the effectiveness of our training, but also the well-being of our horse. We have to reward the small efforts towards the bigger goal, or the horse won’t understand that he’s on the right track, and will either try different answers (some of which may be far from what we’d like him to be doing), or give up all together.

Unfortunately, this isn’t uncommon. Say you’re trying to get your horse to back up – this is an example I see too often in Miniature Horses. The handler steps in front and says Back, but the horse doesn’t know what that means yet, so they don’t move, understandably. Then the handler adds halter pressure, and the horse takes a small step back. Instead of releasing the pressure, to tell the horse they got the right answer, the handler just keeps pushing … they’ve almost got it, just keep trying! But then the horse thinks, well, backing up must’ve been the wrong answer, I have no idea what they want so I’m just going to stand here. Now we’ve activated the opposition reflex in the horse, where they just answer pressure with more pressure. The more we try to force them into the movement, the less likely they are to understand and give us the response we’re hoping for.

Who hasn’t seen a handler attempting, in vain, to shove their horse through a back or sidepass obstacle? It’s so easy to fall into the trap of trying to physically move our Miniature Horses, because they’re so small. But if we’d just use the negative reinforcement appropriately, and release when we see the small efforts towards our goal, our horse would understand what we are asking so much more quickly.

And if we combined the release of the aversive with positive reinforcement – a reward of praise, scratching, or food – then we’ve made it even more clear to our horse that they got the right answer, and they’ll be keen to try again and continue to improve on their response.

Using positive reinforcement, it is possible to train your horse without any aversives – any pressure – at all. But if we’ve chosen to use an aversive of any kind, it’s up to us to do our best to use it correctly, with good timing and minimal aversives, so our horse understands without fear or confusion.

I don’t know about you, but I don’t want a horse who does what I’m asking solely due to fear of the consequences if he doesn’t. Training with frequent use of strong aversives creates obedience through fear, often euphemistically referred to as “respect”. Remember: respect is a human concept, and not something that a horse considers. He simply does what he’s been trained to do, and his feelings about performing that skill – and about you – will depend on the choices you make during training.