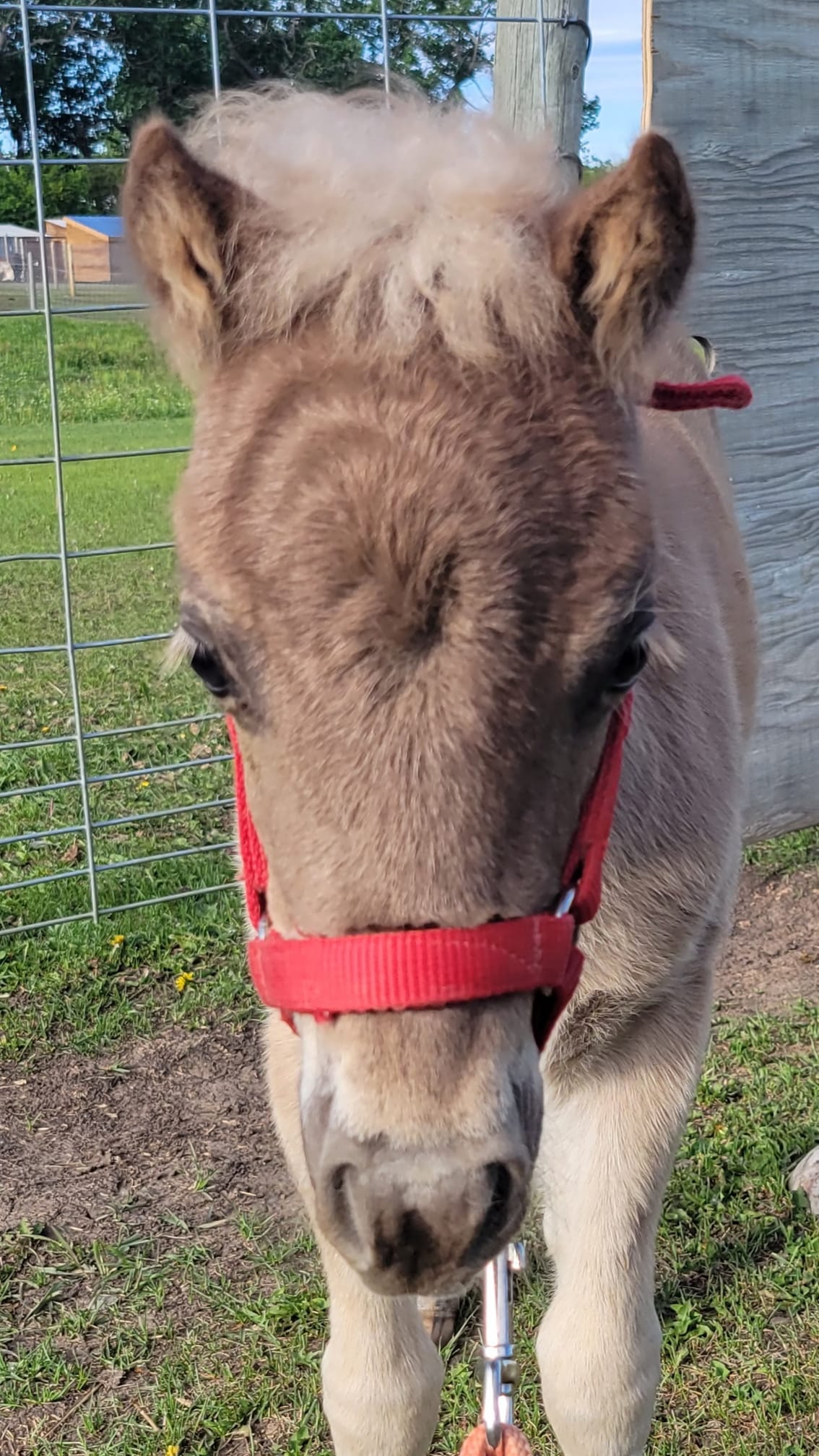 But we can do better than that.

First of all, an approach of “get the halter on and let them figure out they can’t get away” isn’t building very good early experiences with training or with humans. These first skills they learn can impact their willingness to engage and participate in future training for their entire lives.

Second, they CAN get hurt. Many years ago we had a yearling spook while trying to take his halter off, flip over backwards, hit his head and die. A baby foal flopping around at the end of a lead rope definitely can get injured.

In case it’s helpful, here’s what I do.

First, I don’t start right away. Babies need to learn horse things first. And then they need to learn that I am super fun for scratching and snuggles. Until baby is willing to walk up to me for scratches nearly every time I crouch down in his vicinity, he’s not ready to start halter training.

Second, I make full use of a routine. That is, every day I lead the mare out to the pasture, and every night back to her stall and the baby follows along. If you don’t bring your mare and foal in at night, you could easily create this routine by leading the mare on a daily walk around the pasture. But starting halter training works so much smoother when baby already knows where you’re going and mommy is an active participant. There have been studies that show that foals seeing their dam being calm about routine handling is more effective than actually handling the foal in the first weeks of life. This routine ahead of halter training will make a big difference.

I usually start haltering them to go out to pasture when they turn too independent and no longer follow mommy, and instead go zooming off around the farm and I have to stand there in the gate and wait for 10 minutes til they decide to come back. 😉 This varies depending on the foal, but usually anywhere from 2-6 weeks of age. I see no reason to halter them prior to 2 weeks of age. They need to be babies first before trying to learn anything but “humans aren’t scary”.

I put the halter on in the midst of a snuggle session in the stall. I may have to gently hold them at first, but usually very quickly they figure out that halter on means they’re headed outside for playtime and they stand quietly.

I use a long, 10’ lead. If possible, have one person lead the mare and another the foal, but I am usually on my own with both and it works that way too. The goal is not to LEAD the foal at first, but simply to allow him to follow the mare and get used to the idea that you are now attached to each other. Do your very best to avoid any pressure on the leadrope, unless necessary to keep baby safe. If you do end up in a tug of war (you probably will at some point, despite your best efforts), then as soon as baby is standing safely release the pressure on the lead. We don’t need to WIN the tug of war – in this case, winning means a loose lead rope. We want to avoid teaching baby to pull at all costs. I don’t pull on you, you don’t pull on me, that’s the name of the game.

If baby stops, I stop. Wait a few seconds, he’ll probably start walking again, if not, walk the mare a tiny bit (don’t let her get far away though, we want calm baby, not frantic to get back to mommy baby!) If he doesn’t move, since I already have established “come to me for scratches” I’ll crouch down and call him over for a snuggle and reset.

Gates are a challenge, and where baby is most likely to get hurt bouncing off a fencepost if they do panic and pull back. Be cautious and remember that the more you try to control the baby, the more likely things are to go wrong. Give him space as much as possible, give him time, and offer him lots of scratches when he does come to you and mommy on the other side of the gate.

Getting the halter off without the handy barrier of his bedtime stall can also be a challenge. Again, I do my best to avoid manhandling him to do so. I get down on my knees and scratch my way to the halter buckle, and if he jumps or wiggles I allow him to move away and start over. Initially it can take four or five tries and a lot of patience, but it will get easier and easier, and taking your time in the early stages is definitely worth it!

I love the routine of haltering daily for turnout as halter training, because then it quickly just becomes a thing that happens every day. I do my best to maintain my “don’t pull on the baby” rule, as I never want to teach them to pull against halter pressure, and instead simply learn that we are moving places together as a team. As they get more confident, I’ll even use this turning out time to start teaching trotting on the halter (much easier with mom still along too!)

With consistent routine, lots of patience and no pressure or pulling, before you know it, you’ll have a baby who leads with you confidently!

One thought on “Halter Training Babies”