On the evening of Wednesday, July 17, I went out to do chores about 730. When I called Zac, Knight Rider and Frankie to come into their nighttime pen for their grain, Frankie didn’t come. I figured he was busy flirting with Barbie through the fence at first, fed the other two, and went back to get him, only to find that he hadn’t come because he had a cut on his leg, and wasn’t using it at all.

I knew right away this was Bad with a capital B. The two big red flags were that he was so sore on the leg he wouldn’t even try to put it on the ground as he moved; and there seemed to be a watery yellow discharge from the wound, which made me very concerned about joint or tendon sheath involvement. Yellow = potentially synovial fluid. The wound itself was very small, but those were two VERY red flags. All sorts of badness.

I called the vet clinic after hours answering service as I was putting a halter on him, got him moved up to the barn, and the vet called me back as I was walking up to the house to tell Mom we were going to have to go to the clinic. I spoke to one of the new interns I hadn’t met yet (but would get to know very soon 😉 ) and she told me, yes, bring him right away.

Getting Frankie into the trailer was a bit tough, as he couldn’t use the injured leg at all. The one time he tried I saw a stream of yellow (synovial) fluid squirt out of the wound, which I tried to convince myself I imagined, but – spoiler alert – I did not. Mom and I lifted him in so he didn’t have to use his leg, he was such a good boy.

When we got to the clinic we saw Dr. Ben, and intern veterinarian Dr. Tova, who I’d spoken to on the phone. They immediately suspected involvement of the fetlock joint, but we started with a radiograph to rule out a fracture, and check for any foreign bodies in the wound, both of which could explain his severe lameness. Neither was present, so that seemed even more likely that it was into the joint or tendon sheath.

Next they cleaned and clipped the area, and tapped the fetlock joint. Testing the joint fluid showed that it was already septic – the wound was definitely into the fetlock joint. Next they tested the tendon sheath fluid, and it was even MORE septic. Hugely bad luck that a tiny entrance wound led to a deep enough injury to involve both those critical structures, and surprising that it was already septic so quickly – I’d seen him racing around only 3.5 hours before I found him 3 legged lame. In retrospect, we suspect it was so quickly infected as he was going through flooded area behind the manure pile as he was running the fence, all sorts of yucky germs in there. But we have no idea where he originally injured himself. We have hunted and hunted the pasture and can’t find anything that looks like it would cause such a small but deep puncture wound.

They attempted to flush the joint – they put needles into each side of the joint and tried to flush sterile saline through. They were able to get a drip of fluid through, but not a good flow. Next they did a regional limb perfusion, where they put a tourniquet on the leg, and pump antibiotics into the big artery into the lower limb, then leave the tourniquet on for 20 minutes to allow all the tissues in the limb to become saturated with the antibiotics.

After that we talked about treatment options, and while there were more affordable options, his best chance was to leave him at the clinic on IV antibiotics around the clock and repeated regional limb perfusions, so that’s what we did.

By Thursday morning, he was already walking comfortably, which was great, a huge change from not using the leg at all.

But Friday, when his bandage was changed again, there was a lot of drainage, synovial fluid and pus. Dr. Crystal, the surgeon, suggested general anesthesia and a repeated attempt to lavage the joint and tendon sheath to clean out the infection. She felt he was likely comfortable walking on the limb not because the infection was gone, but because it was draining well through the wound.

They started with another regional limb perfusion, then laid him down in their recovery room (as he didn’t need the full surgical suite being so small) on a comfy mattress with a blanket to keep him warm. They scrubbed the leg to ensure sterility and tapped the fetlock joint with needles again. This time, without him standing, they were able to get a great flow through the joint with sterile fluid, with a nice geyser, not just from the opposing needle but through the wound as well, flushing out all the infection.

Next Dr. Crystal tapped the tendon sheath, which was more challenging as it was inflamed and difficult to get needles into it, but a few more attempts and she had it flowing beautifully as well. The tendon sheath was no longer communicating with the wound, even though it had been when she examined it just a few hours earlier, so the wound itself was healing quickly. And once the tendon sheath was well flushed it should also be able to heal well.

Wrapped up in a sterile bandage, Frankie recovered from the anesthesia just in time for a tour of AHT (animal health technologist) students to come through and hear about his injury and treatment, then returned to his stall (which is huge with cushioned stall mats and a wire mesh gate, specifically designed so that Miniature Horses and foals can see out!) and resumed his round the clock IV antibiotics.

We waited with bated breath Saturday morning to hear how he was doing. First report from Dr. Kirby said he was walking comfortably – that was the first good news! Next report came at his bandage change, when there was no drainage from the wound! So exciting! While that didn’t mean we were completely out of the woods, it was a great sign that the infection was under control, thanks to the lavage procedure.

We arrived to visit him later that afternoon just as they were repairing his IV catheter – for the second time. Apparently it itched, or he was just bored, and he was somehow able to yank it out of his jugular vein, even with it covered and taped well.

Sunday morning, the report was still good on the wound – sound on the leg, no swelling, no drainage, and the wound closing up extremely well. But not so good on the IV front, as he’d pulled the catheter out twice more. We decided rather than try to put it back in again, they’d switch the one antibiotic to an intramuscular formulation, and give the last dose of the IV only drug into the vein without a catheter in the morning.

Monday morning I waited for the phone to ring, and the word that he was clear to come home. Instead, when Dr. Ben called, he had bad news. Frankie was very lame again, non weight bearing, and they weren’t sure why. I took the news hard – I think I was so sure he was better that the return of the lameness really threw me for a loop. I didn’t go see him on Monday, as no one needs a panicky owner crying all over them while they’re trying to figure out a mysterious setback in his recovery, but the team at Burwash Equine was once again amazing, keeping me updated throughout the day while they continued to troubleshoot what was going on.

There were no obvious signs of the infection returning, no excess fluid when they tapped the joint, nothing out of the ordinary on ultrasound examination, or any other of the tests they ran. But the fact remained that he was very, very lame. They did a third regional limb perfusion, maintained his antibiotics, and decided that beyond that, it would be best to wait til morning and see what he showed them; either it would improve, or start to show signs it was obviously septic, and then they could move forward with another joint lavage procedure if needed.

Monday was definitely the worst day of all, it was so hard when he was showing every sign of being well on the road to recovery, and then he was suddenly as lame as he’d been the first night, with no answers as to why. I know it was a huge frustration for his veterinary team as well.

Tuesday I decided to go visit him first thing, early enough that I hadn’t gotten my morning phone call update yet when I arrived … but the news was good! While still lame, Frankie was MUCH improved, no longer non weight bearing and now improving as he walked, until he was using the limb quite well. It was such a relief for everyone involved! He also seemed even brighter that he had on the weekend when I’d last seen him, busily offering his tricks and making lots of noise showing off for the mares.

They mentioned that he was starting to be a bit sensitive to the bandage material, so I offered my standing wraps. They’re the cutest things ever, and I was excited for the chance to use them so I ran them back down in the afternoon when I had a chance. He seemed even more comfortable on the leg by then – great news!

Wednesday I was starting to think again about him coming home again, so I answered my morning phone call from Dr. Ben with a bit of trepidation after Monday, but he started the conversation by telling me Frankie was doing amazing! He was walking completely sound on the leg, there was no discharge, or swelling, or any other indications that there were any concerns about lingering infection. He was ready to come home, on some more antibiotics (oral this time) and keeping up on bandage changes for a bit longer.

We did discuss leaving him one more day (in the scheme of this vet bill, one more day of hospitalization wasn’t a huge difference if it meant peace of mind!) but decided that with a horse show looming this weekend, it was better to get him home and into a routine before things got busier for us.

We are so happy to have him home and walking sound! 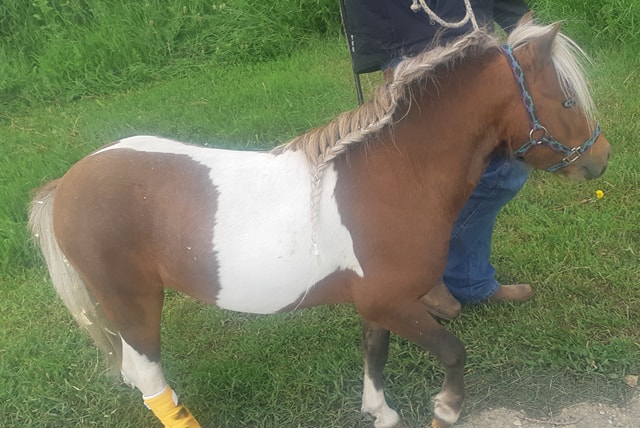 With a lot of top notch veterinary care, Frankie is hopefully going to recover without any lasting repercussions. But without the excellent, and aggressive treatment that Frankie received at Burwash Equine, this tiny little wound could’ve easily meant a severe, long term, even life-threatening lameness, as the infection caused irreparable damage to his fetlock joint.

Moral of the story is: if you have a horse with a wound, even a small one, that involves lameness and/or yellow discharge, your horse needs emergency veterinary treatment.

One thought on “Frankie’s Septic Joint”